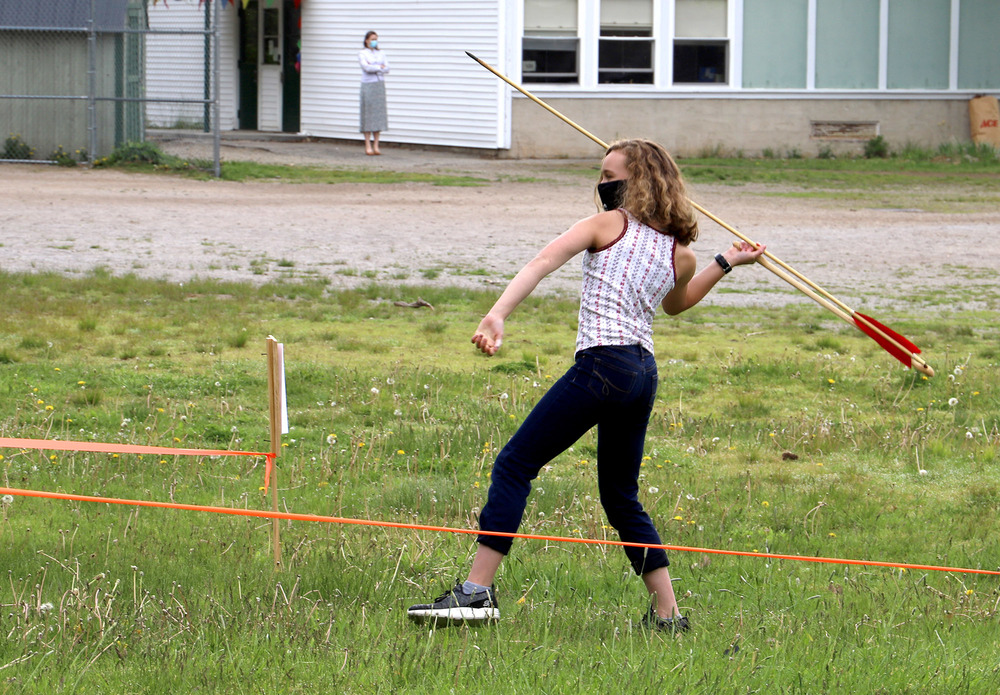 Bath, ME (May 27, 2021) – Every year, fourth graders at Fisher-Mitchell School (FMS) study Maine’s indigenous people, the Wabanaki. In a typical year, Alicia LaFosse’s class takes a field trip to Coastal Rivers Conservation Center (CRCC) in Damariscotta to explore the indigenous people's 12,000 year history, but COVID-19 led to a change in plans.

“This year, [since field trips were not possible], the Center offered an education kit that came with several picture books, and pieces of birch bark that we soaked in water and then etched with a traditional double curved symbol,” LaFosse said. “Students then researched and wrote an informational piece. Topics ranged from transportation to food preparation, uses of birch bark, and hunting and fishing practices.”

LaFosse also wanted her students to experience a hands-on activity like those at CRCC, so the school purchased its own atlatl and spears. Students practiced their throwing technique using a cardboard javelin on a rope tied between two trees and honed their overarm throwing during recess.

“When the day came for actually using the atlatl the kids were very excited,” said LaFosse. “With perseverance and many tries, students began to launch the spear further and further and with better accuracy. Even though only one student hit the target, most of the students did not give up. I think that activities like these are perfect opportunities for knowing that, with practice and a growth mindset, everyone can make progress.”

LaFosse said the exercise also showcased the ability of ancient societies to improve tools, since spears thrown without the atlatl only went a third of the distance.

“This activity, along with publishing our informational pieces, concluded our Wabanaki studies for the year. I hope, however, that students will retain what they’ve learned and use it to understand and appreciate current issues facing the tribes in Maine and our country,” LaFosse said.