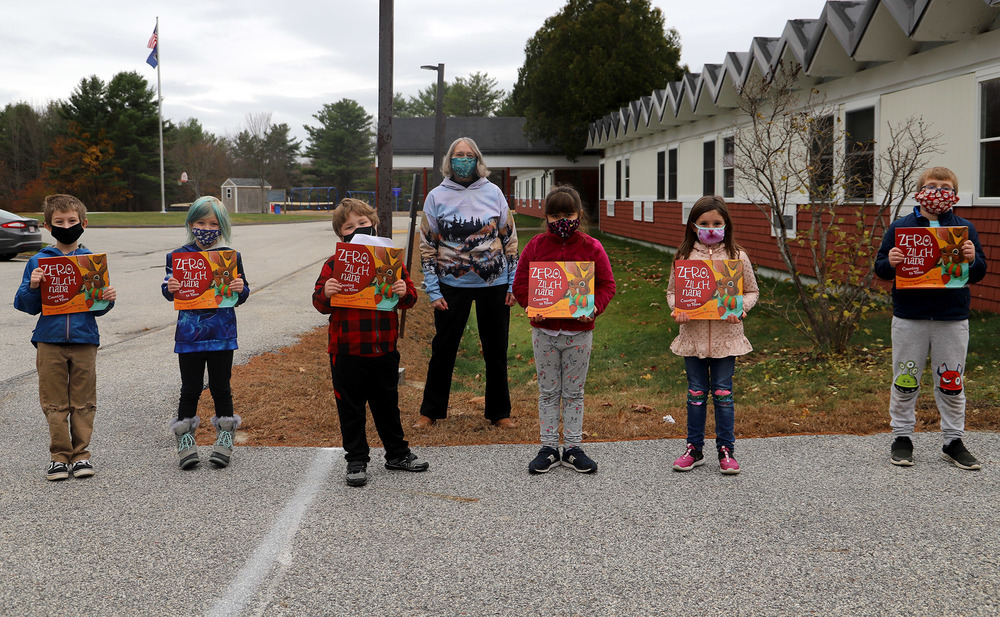 Dike Newell School Students “Count to None” with Wendy Ulmer

Bath, ME (November 25, 2020) - When she thinks back on her school days, children’s book author Wendy Ulmer enjoyed reading and English classes but described math as “traumatic.” Years later, that trauma became the spark for a picture books, Zero, Zilch, Nada: Counting to None, which she recently shared with second grade students a Dike Newell School (DNS).

Ulmer’s relationship with DNS began before she was an author, back when she taught English and music for the district, mostly at Morse High School. After retiring, she realized that she “missed the kids terribly,” and began volunteering at DNS.

Last week, Ulmer gifted Sue Michaud’s second grade class with copies of Zero, Zilch, Nada: Counting to None, which follows the story of a young bunny named Harry who needs the reader’s help to count 100 balloons. Students joined Ulmer on the lawn beside DNS to read the book and help Harry solve his math problem.

“Zero, Zilch, Nada is a great book,” said Michaud. “You can do lots of math activities with it. The students love the story; there are parts in the story that students just jump in and read it with the reader, so it's sort of like a song.”

The students also help Ulmer with her writing – for the past four years she has been reading drafts of new stories to the class.

“It’s been awesome to hear their feedback,” she said. “Along the way, I tell them about the whole publishing process.”

Students have watched Ulmer’s work progress from rough stories written on paper into published novels. Sometimes she asks students for their opinion on illustrations and has shared other writing experiences with them as well.

Michaud said she loves having Ulmer come into the class.

“She has brought so many great ideas and I have learned so much from her,” she said.