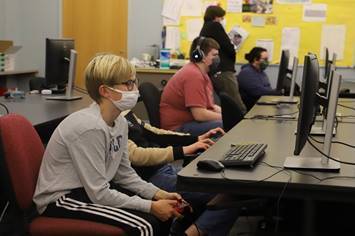 Bath, ME (November 9, 2020) – As electronics become an increasingly common part of our daily lives, it’s not so surprising that schools across the country, include Morse High School, are adding esports to their athletic programs.

Esports, video game tournaments in which teams compete via virtual game rooms, has been growing as an industry for years, but is relatively new to schools. Since the first collegiate program started at the University of California-Irvine in 2015, 175 colleges and universities have added officially recognized varsity esports programs to their athletic offerings.

In Maine, based on the rising popularity of esports and the cancelation of traditional spring sports due to the COVID-19 pandemic, the Maine Principals’ Association (MPA) decided to sponsor esports as an extracurricular activity this fall. Morse High School Athletic Director Nathan Priest saw the program as an opportunity to engage a different population of students in sports and began searching for a coach, which he found in EdTech and former baseball coach Brandon Murray.

“Esports has been considered a club sport of the first part of the year, but we just received confirmation that it can become a varsity sport,” explained Priest. “I want to treat the program like any other sport: with lettering, pins, and team captains.”

Twelve students have joined Morse esports state and regional team so far. The game they play is called Rocket League; an online, team-based soccer game played with cars instead of people. Although it’s possible for students to play remotely from their own homes, the team has made a point of gathering at school for practices and games. Just like any other sport, Murray helps develop gameplay, grow skillsets, and encourage teamwork.

“Esports gives students who might not participate in traditional sports the opportunity to be part of a sports team and do something they enjoy,” Murray said. “At its core it’s just like any other sport – it’s a competition.”

Rocket League matches are arranged through esports platform PlayVS. Each match consists of five rounds, five minutes apiece. Rather than a quiet room of controllers clicking and screens flashing, the computer lab at Bath Tech where the team meets can be as raucous as any sports field as the team communicates with each other. At their first game against Waterville Senior High School on October 29, players called positions, cheered each other on, and advised each other on tactics being used by the opposing team. They won 3-0.

“No one is giving us the ‘they’re playing video games at school?’ reaction. Some people (who hear about esports) might say, ‘It’s just pixels.’ But it’s more than that. It’s like you’re really there, playing the game.”

Junior Alex Maccio, who also belongs to the school’s football, basketball, and cross-country teams, said he notices a lot of similarities between traditional and Esports, right down to the nervousness and adrenaline he feels before a game. He was proud of their first victory and said the team is already bonding.

“We’re becoming like a family, and it’s inspiring me to practice on my own to get better at my skills,” he said.

So far, Morse has played only in-state opponents, but the freedom of online gaming means they could be playing high schools from across the country next year. There is no way for spectators to watch the games right now, but Murray hopes that students and parents will be able to watch from a designated room or screen at the new Morse High School.