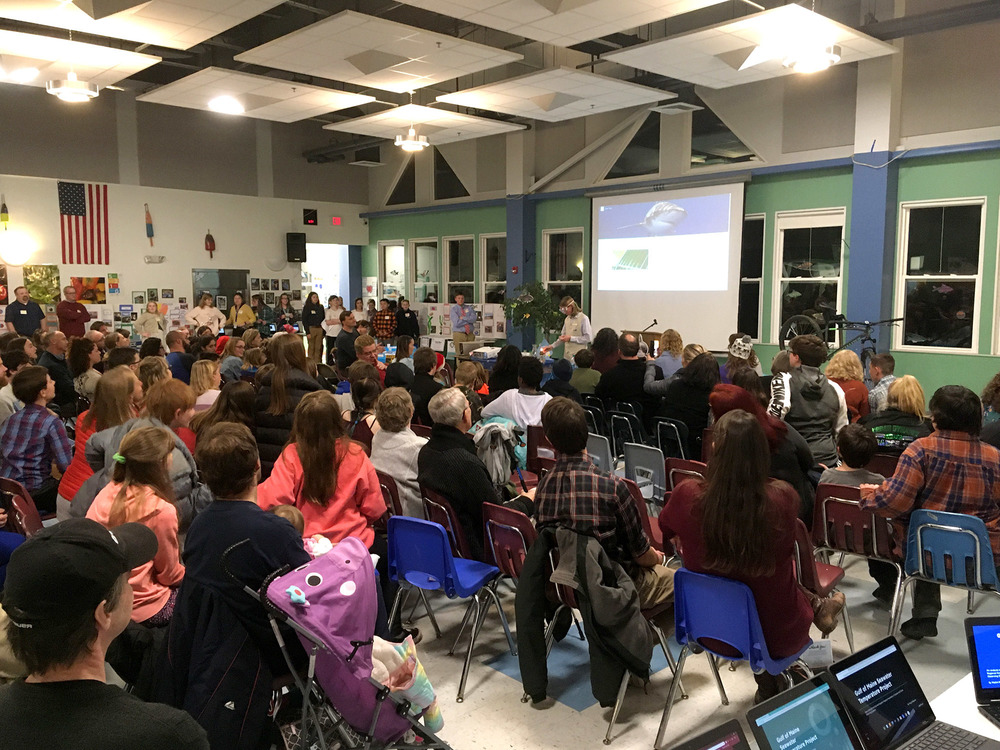 “When you get excited about something, it’s not about the grade anymore.”

Bath, ME (March 26, 2020) – A project which has been a keystone of 7th grade student learning at Bath Middle School (BMS) since 2013 has been highlighted as an exemplar of extended interdisciplinary learning. “Sustainable Seas” was one of only seven case studies chosen from 404 submissions to be included in the 2019 Census of Community-Based Environmental Learning in Maine, a joint project of Maine Mathematics and Science Alliance and Maine Environmental Education Association.

Sustainable Seas rose from a need addresses an issue which is particularly relevant to coastal Maine: green crabs. The invasive species has been plaguing shellfish (like blue mussels and soft-shell clams) for over a century.

BMS science teacher Monica Wright said she was blown away by the decimation of native populations because of green crabs, but saw a silver lining: with a classroom of students already invested in the coast (whether they grew up going to the beach or eating seafood, or their parents were fishermen), this was an engagement opportunity. In 2013 she reached out to the area’s land and wildlife conservation organization, the Kennebec Estuary Land Trust (KELT), and asked if they would be willing to help her and her students study the crabs. With KELT’s support, Sustainable Seas was formed, and students began studying green crab populations in the field.

Every fall, Wright’s students head to beaches like Reid State Park, Robinhood Cove, and Fort Popham to collect data according to procedures outlined by the Vital Signs program, a statewide effort to document and address invasive species. By studying the crabs within a 1-meter square plot over the course of two days, students are able to estimate the population of crabs in the area and gather metrics on their size, color (not all green crabs are green!), and sex.

As each year passes, students have more information to analyze when they finish their research. Wright was particularly proud when two of her students were published last year in Findings from the Field, a middle school journal of scientific research published by the Gulf of Maine Research Institute. “Crab Per Trap to Year and Location 2013-2017” by Adriana Gonzalez and “Effects of Climate Change on Green Crab Population in Maine Coast” by Riley Dunn explore the negative impacts of the crabs and how their population has changed since the first class of students recorded their findings in 2013.

Already a successful project from a science perspective, Wright elevated Sustainable Seas to an exemplary level by inviting BMS teachers to use the theme as a platform for interdisciplinary learning. English Language Arts (ELA) teacher Adelle Carter was quick to hop on board.

“It’s really been a motivation for me,” she said. “I’ve become a marine-based thinker.”

Carter was key in developing the idea for a 7th grade Shark Tank this past December – a convention where students were asked to invent and present a product that would benefit the ocean environment. Students presented their products, which ranged from seaweed wrappers (an all-natural substitute for plastic food bags) to biotive fuel technology (a diesel substitute made from algae), to a panel of four teachers (“sharks”). Some students even found uses for green crab, which currently have no viable commercial market, by turning their meat into tasty empanadas and their shells into jewelry.

“I think that the Shark Tank was a great way for kids to take [Sustainable Seas] to the next level: to think critically and be inventive,” said Carter. “I had really high expectations – [the students] had to memorize their pitch and make a commercial to advertise their product,” which they did with the help of technology coordinator Bob Jordan.

Carter said that the Shark Tank not only aligned perfectly with the 7th grade rubric but also elevated student engagement. “When you get excited about something, it’s not about the grade anymore,” she said.

Winners from the teacher-judged Shark Tank convention went on to present their products at BMS’s Community Night – Wright’s son, Declan, with his biotive fuel invention, won the overall competition. Wright said he has continued his algae research as a passion project even though Shark Tank is over.

Wright became aware of the ownership change in her students when they went from talking about Sustainable Seas as just “a school assignment” to discussion about “my green crabs, my school article, and my data.”

Looking ahead, Wright hopes to be able to add another layer of independence for future classes: overnight field trips designed to provide students with immersive experiences. She will also be brainstorming new studies if her green crab project ever “runs out of steam.” No matter what shape it takes in the future, though, Sustainable Seas has established itself as an integral part of the 7th grade experience.

“It’s a common experience that brings [students] together,” said Carter. “It’s part of their identity at BMS.”