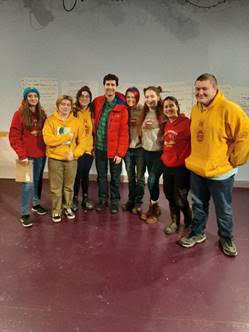 Bath, ME (February 26, 2020) - From student-written plays to workshops with renowned playwrights, Morse High School’s theater program has been brimming with activity and opportunity during one of its last seasons at the Montgomery Theater.

“It’s a unique and busy time for us,” said Kevin O’Leary, who teaches English and Theater at Morse. “The kids did their own fall One-Act Festival this year, then we had MOHIBA (Morse’s annual variety show), and now we’re preparing for the Maine Drama Festival.”

Students in O’Leary’s playwrighting class are also enjoying two unique opportunities to work with industry pros. In January, the class was invited to join Tony Award nominated Maine playwright John Cariani (author of Almost, Maine; one of the most frequently produced plays in the United States) for a playwrighting workshop at Portland Stage. Seven Morse students joined other playwright hopefuls for the three-hour class. Senior Hannah Goodman said she enjoyed the exercises in improvisational writing, and Cariani’s insights.

“One phrase he said really stuck with me,” said Goodman. “He said, ‘When you write a play, start at the end so you know where you’re going.’ I’ve been thinking a lot about that.”

Morse High School was also one of only two schools in the state chosen to participate in an intensive four week play workshop organized by Acorn Productions (producers of the Maine Playwrights Festival) and funded by a grant from the Margaret E. Burnham Charitable Trust. Under the mentorship of professional writers, directors, and producers, O’Leary’s five student playwrights will each develop a 10-minute play which will be performed at The Studio Theater at Portland Stage in April.

Daniel Burson, the Maine Playwrights Festival Artistic Director and dramaturg, co-teaches the workshop alongside professional playwright Travis G. Baker. He said that schools are selected for participation based on a strong history of student playwrighting; Morse High School is the only Class A drama program in the state to bring student-written plays to the Maine Drama Festival every year, since 2002.

“We want to remove barriers that might be standing between writers and professional mentorship,” said Burson. “It’s really exciting to see where the creativity of the students leads to. We have plays ranging from a family relationship drama to a sword and sorcery fantasy.”

Burson said he hopes that the program will encourage a new generation of playwrights.

“This is the way we’re going to get Maine stories in the future. We’re thrilled to have the Morse students take part and see themselves as writers and playwrights,” he said

Amidst all the excitement in his department, O’Leary is also mindful that Morse’s Montgomery Theater is approaching its final season. The school is preparing to relocate to a new building next year and will have to leave the beloved theater behind.

“Leaving Montgomery Theater is bittersweet,” said O’Leary. “This is where I began my program. This theater has so many memories. The ‘sweet’ is that it’s always nice to begin anew.”

O’Leary said he intends on bringing old theatre traditions with him to the new school, and then tweak them to be relevant to the modern kid. But there is little time for reminiscing; he and his students are currently immersed with preparations for the Maine Drama Festival taking place in the spring.

“The kids are incredibly proud of what we do,” O’Leary said. “Any program worth its salt takes year and years to develop. The kids really own this program.”